Chronic obstructive pulmonary disease, commonly called COPD, is a lung disorder brought on by years of smoking, or by ongoing exposure to harmful environmental toxins that permanently damage lung tissue. The result is obstructed airflow that makes it difficult to breathe, and limits the amount of available oxygen to satisfy cellular needs throughout the body. 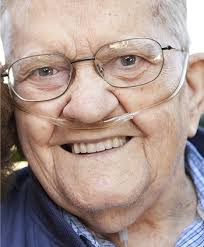 COPD patients are typically older adults who often also have other metabolic disorders associated with aging. These clients are often on multiple medications, and frequently carry oxygen tanks with them to increase available oxygen to the lungs. While COPD is not reversible, working with COPD patients can be rewarding, as you help them cope with their limitations while improving their overall quality of life.

The alveoli play an important role in the exchange of oxygen and CO2 traveling to and from your body’s cells. Their thin walls are filled with capillaries that allow oxygen to enter your bloodstream, while enabling carbon dioxide, a byproduct of cellular metabolism, to leave your body as you exhale.

The structures and tissues of your lungs have elastic properties that allow them to expand and contract, facilitating the process of respiration. When damaged by COPD, those structures lose their elasticity, causing air to become trapped in your lungs during exhalation. In addition to the lung tissue itself, respiration is facilitated by your diaphragm and other muscles involved in the respiratory process.

Types and Symptoms of COPD

Most cases of COPD fall under one of two subcategories; either emphysema or chronic bronchitis.

Chronic bronchitis is an inflammation of the bronchial tube lining, causing tubes to narrow and produce excess mucus, which further blocks the narrowed tubes. Chronic coughing to try to clear the airways can reduce the amount of oxygen that reaches the alveoli.

With emphysema, the alveoli themselves are destroyed due to ongoing exposure to toxic gasses and particulate matter. Small airways may collapse during exhalation, reducing the amount of air that can exit the lungs.

Symptoms of COPD include:

While COPD is not curable, it is treatable. In addition to a wide variety of medications aimed at reducing the symptoms of COPD, there are treatments that can help to improve respiration and ease symptoms. Two common treatment options include:

Clients with COPD have usually been given some exercise guidelines from their health care provider. As a fitness practitioner, your goals should be to help improve muscle and lung function, and increase exercise tolerance and endurance.

Some guidelines for working with COPD clients include:

Working with special populations can be gratifying and rewarding. Helping others to improve their quality of life while managing their limitations takes patience, empathy, and basic knowledge about the client’s condition. W.I.T.S. is here to help with continuing education resources to support you and increase your professionalism. Consider taking the course “Respiratory Rescue: Understanding the Pulmonary Dysfunctional Client,” or learn more about common health disorders with the “Chronic Disease and Exercise Certificate Program.” Set yourself apart with specialized knowledge from W.I.T.S., to build your reputation and increase your income.