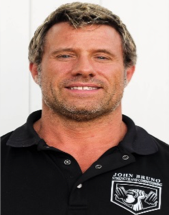 W.I.T.S. would like to introduce John Bruno. We are excited to have such a tremendous Certified Personal Trainer & health educator work with the future fitness leaders of tomorrow.

In 2002, after playing many sports for most of his life such as hockey, practicing martial arts, soccer, football, and wrestling, John Bruno began his career as a fitness professional when he took a part-graduate assistantship at Mercyhurst University in Erie, PA. As a graduate assistant he was tasked with running a recreational martial arts and fitness program at the schools Fitness Center. From there he began training martial arts competitors and boxers and the athletic department took notice. In 2007, Bruno was hired on as a full time Strength and Conditioning Coach to overseeing both the Strength and Conditioning program and Martial Arts Program. After attaining his Masters Degree in Organizational Leadership from Mercyhurst, Bruno left the college after 11 years to pursue another Masters Degree in Exercise Science with a concentration in performance enhancement and injury prevention from California University of Pennsylvania, where he graduated at the top of his class.

Upon graduation from CalU, Bruno moved to Sarasota Florida where he now resides and runs his business, John Bruno Strength and Conditioning, in addition to teaching personal training courses for WITS at local universities and colleges. He believes in being a lifelong learner and has obtained many certifications and credentials over the years.

Bruno teaches at the following W.I.T.S. locations in Florida: