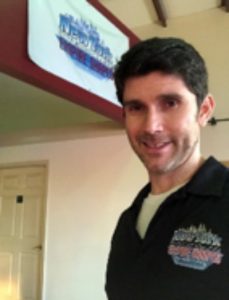 W.I.T.S. would like to introduce Jeremy Kring. We are excited to have such a tremendous Certified Personal Trainer & health educator work with the future fitness leaders of tomorrow.

Jeremy got his start in United States Marine Corps where he was promoted to NCO in charge of training. He fell in love with physical training, witnessing the amazing ability the body had to adapt and the leadership opportunity it provided to young Marines.

Jeremy found a natural talent and enjoyment in training. After leaving active duty he attended Harrisburg Area Community College, Duquesne University, then completed his Masters in Exercise Science at CalU. Over the years he has worked with athletes, been part of dramatic weight losses, and has worked with people of varying abilities and chronic conditions.

Jeremy has been published on the Medical Fitness Network and has been cited in articles on exercise.com and Readers Digest. In 2016 and 2017 he was ranked as the top trainer in the Harrisburg area by Thumbtack and in May of 2017 came on board as a college instructor for World Instructor Training Schools (WITS). He is currently an instructor for WITS and is the head trainer for New York Fitness Clubs located in Palmyra, Elizabethtown and Lebanon. WITS locations in Pennsylvania include the New York Fitness Club in Elizabethtown.